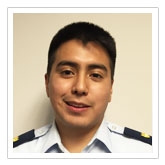 Lieutenant Junior Grade Jesuar Smith graduated from the United States Coast Guard Academy in 2012 where he earned his Bachelor of Science in Operations Research and Computer Analysis. Upon receiving his commission as a Coast Guard officer, he reported to the CGC MIDGETT in Seattle, WA as a Student Engineer.

While aboard the CGC MIDGETT, LTJG Smith filled the roles of the Electrical Division Officer and Damage Control Assistant. LTJG Smith was promoted to the position of Assistant Engineer Officer, the second highest position for an engineer on a Coast Guard cutter. As the Assistant Engineer Officer, LTJG Smith showed the required leadership and organizational skills that is the hallmark of a Coast Guard Naval Engineer. He led all underway and import damage control drills, ensure the proper execution of all engineering casualty responses, was instrumental in the planning for the CGC MIDGETT’s $1M dockside, and spearheaded countless new initiatives.

Upon completion of his tour on the CGC MIDGETT, LTJG Smith then reported to the Surface Forces Logistics Center’s Patrol Boat Product Line in Norfolk, VA to be an Availability Project Manager and in his time planned and executed dockside and dry-dock maintenance availabilities for Coast Guard Patrol Boats throughout 6 Districts. Able to quickly grasp how to perform the duties and responsibilities of his new position, he was quickly assigned to more complex problems like the newly established 87’ Patrol Boat Bow-to-Stern program at the Coast Guard Yard. He was a lead member of the charter working work responsible for this innovative program which is the largest depot level maintenance program for surface fleet assets in the U.S. Coast Guard.

Distinguishing himself as a dynamic planner with highly logical skills, LTJG Smith assumed his current position of Section Chief for Coast Guard regions that cover the entire Pacific Region including locations like Hawaii, Guam and Alaska, as well as mission critical operations in Bahrain and at two Naval Submarine bases.

LTJG Smith is responsible for all depot level maintenance support for 14, 110’ Patrol Boats, and 22, 87’ Patrol Boats. He is also the key liaison between the Patrol Boat product line and the Coast Guard’s Districts and Sectors, managing in the arena of a $34M maintenance budget and supervising 13 port engineers and 4 project managers all geographically dispersed.

While managing these resources LTJG Smith also served as a direct project manager flawlessly planning and executing 7 depot level maintenance availabilities totaling over $3.1M dollars. He has also championed new practices like 3-dimensional laser hull scanning of the aging 110’ Patrol boats that have been in service for over 30 years. He also refined the rotation pool process and the specifications that will be applied to 50, 87’ Patrol Boats over the next four years saving nearly $3M dollars. The program also reduced crew days away from home port, thus providing operation commanders and intensively increased readiness posture.

The Coast Guard prides itself of being always Semper Paratus always ready to accomplish multi missions in the Maritime. LTJG Smith’s tremendous leadership and support, each and every day, allows the Coast Guard to get the job done always.

Great Minds in STEM was honored to provide a STEM Hero Award to LTJG Smith in October of 2017.