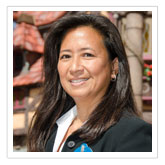 Esther Andras is currently a Principal Architect AIS for the Disneyland Resort in Anaheim, CA. She was born in New Jersey, to loving parents who immigrated from the Philippines at a young age and met in the U.S. They were incredible role models for her and her sister, always instilling in them to “work hard and always try your best.” Esther describes her parents as “real-life examples that prove that hard work can lead to success; courage and risk taking can lead to exciting opportunities; kindness, generosity and honesty can solidify communities and friendships; and that love, respect, laughter, and commitment can strengthen the family.””

Esther was heavily influenced by her dad who loved to draw and build things around the house. When she decided to be an architect, her parents encouraged her to pursue her dreams. She was accepted in the Architecture program at California Polytechnic University Pomona, where she received a wonderful education. She took the opportunity get involved on campus as well as to study abroad in Italy for one year which she describes as “an experience of a lifetime.”

After graduating, she worked with several small architecture firms which not only gave her the experience in architecture and construction projects but also allowed her to “find her voice” as a Filipino woman in the mostly male dominated industry. She joined the Disneyland Architecture and Engineering Team in 1995 where she has had the opportunity to work on many exceptional projects and initiatives and to work alongside a group of Cast Members who are the best in the business.

Esther has a unique role within Walt Disney Parks and Resorts as a Manager for Design Assurance. Through her work with Disney over the years, she gained a great deal of experience as Disney opened new and exciting attractions such as Disney California Adventure, an entirely new theme park in 2000. Esther has been a key leader as the primary interface with the City of Anaheim planning, building, and fire departments for new development and expansion. Almost everything that Disney does requires “out of the box” thinking to make it work and Esther is an expert, always inspiring others to do the same without compromising engineering or architecture design discipline. Most recently, Esther led a team to relocate back of house functions in preparation for the new Star Wars Land development at Disneyland Park.

In addition to her passion for her design work, she also has a strong passion for the career development of young architectural and engineering talent. As part of her responsibilities, she manages the Disneyland Resort Professional Internship Program with the A&FE team working with architecture and engineering college students for internship positions and paying it forward as a mentor for many of these students.

Esther has also used her technical talent to support community projects such as working with the A&FE VoluntEar team, to renovate the Anaheim Boys and Girls Club facilities in Anaheim, CA. She also participates in Career Days in local elementary schools in the area inspiring the next generation towards careers in STEM.

Esther is happily married to Joseph and they are the proud parents of two college age children who aspire to pursue STEM careers. In 2013, Esther received the Company’s highest recognition “The Walt Disney Legacy Award” for her ability to Dream, Create and Inspire others. Great Minds in STEM is proud to feature Esther as our Professional Role Model of the Week.