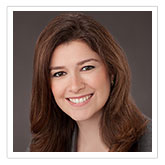 Born and raised in Venezuela, Vanessa Kertznus grew up in the shadow of the Central Cordillera. It was her surroundings, close to the mountains and the ocean, that helped to shape her education and career choices. With a love for science and with curiosity for the outdoors, Vanessa realized at 15 that a career in Geology would satisfy the innate curiosity she had for both. She also liked art, and geology appealed to her because in a way, it is an “artistic science, requiring pattern recognition, imagination and creativity, and it is very visual.”

Education was highly valued in Vanessa’s family, her mother steered her to always keep on studying and learning, but her father was not thrilled with her choice of geology as a field of study. “He wanted me to be a doctor – an M.D.,” she recalls. “I listened to his advice, but decided to pursue my own direction. And now I am a doctor, but not the kind that saves lives”

She started her university education at age 16 at Universidad Central de Venezuela, Caracas, Venezuela. Before finishing the five-year Geological Engineering program, she submitted a paper (part of her thesis) to the 2002 AAPG (American Association of Petroleum Geologists) annual conference in Houston. Her presentation in this conference, which resulted in winning the best student paper, served as a platform to show her work and capabilities. Soon after she received a job offer as a geologist with Integrated Reservoir Solutions in Houston.

Her three years at the company gave her experience in evaluating reservoir characteristics and allowed her to interact with many oil companies. In 2005, she received a grant to work on a Ph.D. project at the University of Aberdeen. The project, sponsored by a consortium of 14 energy companies, focused on “Stratigraphic Development of Tertiary and Quaternary Delta-fed Turbidite Slope Systems” (her thesis title) in the Nile delta (Egypt) and the Ebro delta (Spain). According to her colleagues, her doctoral work represents a landmark contribution and a point of reference for similar studies in other margins around the world. Vanessa had multiple job opportunities when she finished her Ph.D. in 2009. She chose Shell because she wanted the opportunity to work with “the best technical minds” and she saw that opportunity in the role Shell offered as an exploration geoscientist.

In the eight years since joining Shell, Dr. Kertznus has been playing an important role as an explorationist and as a technical leader. She has broadened her technical portfolio by working in a variety of continental margins that include Borneo, Nigeria, Brazil, Guyana, French-Guiana, Uruguay, Colombia and Gulf of Mexico, among others. Vanessa progressed to Senior Geologist, then Staff Geologist, Subsurface Lead for Mexico Ventures, and her current role is U.S Gulf of Mexico Paleogene Play Growth Supervisor. She leads a technical team focused on developing and high-grading the asset’s portfolio, influencing investment/commercial activities to maximize the asset’s value through technically and economically sound strategies.

Vanessa is active in the Hispanic community through one-on-one technical and non-technical coaching of Latino colleagues, and mentoring more junior staff. Great Minds in STEM is proud to feature Vanessa as our Role Model of the Week.