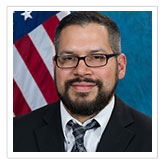 Luis was born an “Army brat” to parents of Puerto Rican descent. His parents met at the Catholic University in Ponce Puerto Rico. His mother, was an embassy worker and teacher and his father was also an artillery officer in the U.S. Army. Luis’s career is an example of hard work and dedicated service traits he learned from an early age from his parents and his strong Catholic upbringing.

Luis’ childhood was spent traveling to various military installations, including in Panama and Paraguay. Service to his community was instrumental in his youth as he was part of the Junior Reserve Officers’ Training Corps and often volunteered for hurricane relief efforts during natural disasters. He attended Embry Riddle University where he obtained his Bachelor of Science degree in Aerospace Engineering and mathematics in 2005 and started his Government civilian service in June 2006.

After graduation, Luis worked with the U.S. Army as a civilian assigned to the McAlester Army Ammunition plant in McAlester Oklahoma where he studied ordinance and ammunition. While working with the Army he was re-assigned to Redstone Arsenal, Alabama as an ammunition surveillance specialist.

In 2007, Luis was selected as part of the Missile Defense Agency’s Missile Defense Career Development Program as one of their first groups of professional interns. Under this program, Luis rotated through three different assignments to make sure he was exposed to many career opportunities within the Agency. Luis always chose the toughest and most demanding assignments.

With just 10- years of experience he is already directly responsible for the planning, budgeting and scheduling of system level ground testing, documented in the integrated master test plan which is one of the agency’s most important annual submissions to the U.S. Congress. In his time with the Missile Defense Agency he has managed or executed 16 flight tests, 6 war games and exercises and other ground tests most notably, during his time in the flight test execution division, Luis conducted four flight tests with the governments of Israel and Australia. Under his current role as Integrated Master Test Plan Ground Test Lead, he led Agency stakeholders in development of a new ground testing methodology, which will mitigate schedule and technical risks in ground test campaigns.

Throughout his life, Luis has continued his involvement with the church and organizations who work with the homeless and the hungry. He currently supports church food distribution to Northern Alabama and Georgia delivering donations to those in need. A strong supporter of STEM education for the Hispanic community, Luis contributes generously towards scholarships through the Combined Federal Campaign. For his service to his country and community, Great Minds in STEM honored Luis with a STEM Military Hero Award in October 2016.