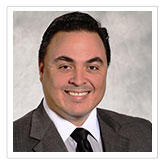 Jose Borges was born in Puerto Rico, as part of an Army family, that moved many times before finally settling back on the Island when he was 10 years old. As an “Army brat” he learned to understand the value of diversity, a lesson taught to him by his parents and the great soldiers who surrounded him. His mother taught him the value of community service and the importance of teamwork. These wonderful traits were re-enforced and nurtured over time through his involvement with the Boy Scouts of America. In fact, it was his scoutmaster, a civil engineer, who advised Jose to consider a career in engineering and was the biggest influence in Jose choosing to study Mechanical Engineering.

Jose earned his B.S. in Mechanical Engineering at the University of Puerto Rico, Mayaguez and upon graduation left Puerto Rico to work for Raytheon Missile Systems in Arizona as an Electro-Mechanical Engineer. Outside of his engineering responsibilities, he fostered his commitment to the community by organizing many engineering networking events, symposiums, student festivals and served as a tutor at local schools encouraging students in their pursuit of STEM fields.

Jose is well-known among his colleagues for his enthusiasm and passion to help those around him, both in the workplace and in the community. At Northrop Grumman, Jose works with Strategic Special Programs as a Sr. Project Engineering Lead. He and his team run the baseline management integration of multi-billion dollar special programs, and they were honored with the 2015 Northrop Grumman Award for Program Excellence.

Through his work with Northrop Grumman’s STEM initiatives, more than $160,000 in scholarship money has been given to underprivileged students seeking higher education in STEM. He has worked closely with community outreach initiatives to sponsor many STEM science nights at local schools, as well as supports mentorship programs and educational fairs. He works constantly to harness the power of his peers in the technical community, and through Employee Resource Group initiatives to maximize the impact of STEM across our communities at company-wide levels.

Great Minds in STEM was proud to recognize Jose for his work and community leadership with a Luminary Award in October 2016.